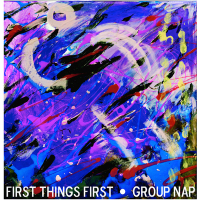 Group Nap started as a three-piece band in October 2015 when Emma brought some music to Brendan and Kat so they could play a Halloween show. Since then the band has expanded to include as many as 8 members, and has adopted Brenda, the flying air dancer, as their symbol, aligning with their aesthetic values. In March 2016, they recorded a music video for their song 'Unhinged'. "First Things First', Group Nap's first EP was released October 2016,and can be downloaded for free at groupnap.bandcamp.com