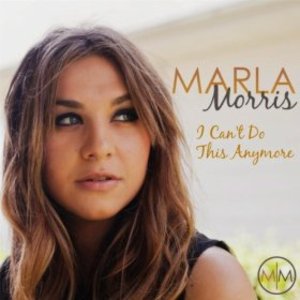 I Can't Do This Anymore
Marla Morris
Belmont

I Can't Do This Anymore
Marla Morris

Talent and determination define 21-year-old vocal powerhouse, Marla Morris. Her latest album, Ready for the Rain, which features songs all written or co-written by Marla herself, showcases her coming of age as a writer and an artist with complex themes of lost love, friendship, and growth of the human spirit. Hailing from the small New England town of Bethany, Connecticut, Marla’s innate passion for country music is revealed through her stylistic songwriting. 'Ready for the Rain' was featured under “New and Noteworthy” on the country page of iTunes, as well as the “What We’re Listening To” and “Rising Stars of Country” sections. The album landed on the Top 100 Country Albums chart on iTunes in its first day of release and has repeatedly returned to the charts. Recently, Marla released her newest single, "I Can't Do This Anymore," which was also featured on iTunes' "New and Noteworthy." She has shared the stage with Kix Brooks of Brooks and Dunn, Lorrie Morgan, and Chuck Wicks.